Ralf's main part in the development of G3 was art direction. He answered our questions in October 2016, shortly before Gothic 3 celebrated ten years since its release.

Follow comixfactory.de to find more info about Ralf and his current work.


Hi Ralf! Many thanks for finding some time for our questions. Gothic 3 will soon celebrate the 10th anniversary since the game was released on the 13th October 2006. What's the first thought that comes to your mind when saying that?
It was a tough production - especially in the end. I mean, people were working sometimes for 48 hours straight, go home, sleep some hours and come back right away. But it was also quite a warm atmosphere of comradeship and support. I never heard anybody arguing in the office and especially Björn and Mike showed some real leadership-qualities. There was so much pressure to get the game out - we all stuck together quite tightly...
Can you remember how it looked like in the PB's office during the days before the release date and after?
It looked like people were sleeping in the studio - which they did! When I came in, there were programmers and artists sleeping on sofas in the meeting room, a good deal of takeaway boxes of half eaten food and the whole place reeked of hard work and long hours.
It's been said and written too many times already that the game was released earlier than it probably should have been. Gothic 3 reached the market even though it contained lots of bugs etc. How did you personally see the situation back then? I can imagine you were not involved in development of the game at that stage anymore, right?
Yes, I was still there. And I was also busy with the marketing stuff. The game was originally planned to contain horses as well - but we never even got close to put them in the game. This is, why the whole world is so huge. With horses, you can cover distances much faster. We never got around to get those in. This too goes for hair for the characters. Another problem that could not get solved in time. This is why the all have that buzzcut.

As far as I recall, the publisher allowed for some extra time to get the game done, but when that ran out, there was no more money left. Most of us hat to take quite some cuts in our payments in the last months of production, because only when PB delivered a master, the next installment of payments from the pubisher would be released. PB was not a huge studio then - so keeping everybody payed more than a couple of months without fresh money was not possible.
Please tell us, what are your best and worst memories of Gothic 3?
The best was to see Mario still standing and in good spirits after two days of straight work and saying hello when I came in in the morning. A remarkable man!

The worst are best forgotten... ;-)
What is your most favourite concept art for Gothic 3 that you created and why?
I allways liked the Nordmar warrior. Because I felt, I really captured the look and mood our gamedesigners where after. 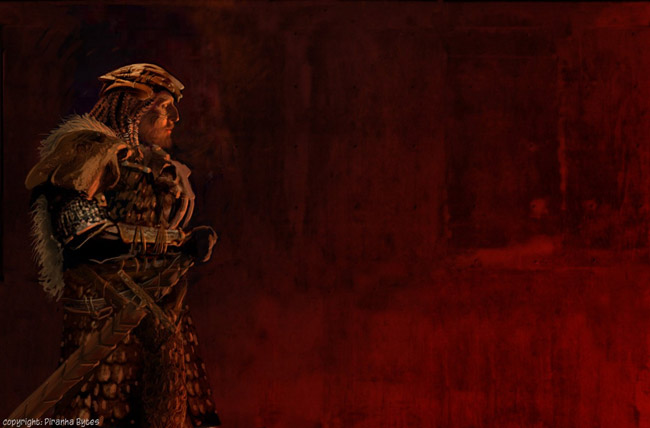 The game contains three regions: A desert, midlands and snowy mountains. All three being completely different art setting. How hard was it to bring all that into a single solid game world? What were the largest issues you had to deal with when it comes to this fact? And which one of the regions is your favourite one?
I really liked the desert. We could have done so much more, if the studio would have been bigger. I mean, the GFX team where 5 people at the core - and 3 more for building and texturing. It really was quite a challenge the get the stuff done and the animation too, so it at least fet like a AAA game. Again - the horses were responsible for the long distances between the areas. But it seems, that not many players had a problem with that.
Where did you look for inspiration for G3? Did you visit any interesting places or did you study any specific materials regarding the art setting of Gothic 3?
I went back to the "orientalist-Movement" of the late 19th century. A huge influence. Also, I took a lot of inspiration from the film "The 13th Warrior" and its source novel "Eaters of the dead". The rest came from private trips to Spain, where I also took quite a bit of photographs for my textures.
Have you ever played the game actually? If yes, how did you like it from the player's point of view?
Yes-I did. But I have to admit, that I left it after about 25 hours. It was too painful- and I really didn't want to make it to the end to not be dissapointed further. It felt bigger when we were making it. And most of the surprises are gone, when you made a game and then you play it. I am sure, most developers feel like that.
If you had a chance to participate in a project like Gothic 3 again, would you take it? What would you do differently now?
No - I really don't want to spend another 3-4 years of my life on one game. Lifetime is too precious for that. This is why I took on smaller games after that - or work as a concept artist, where my contract ends after a couple of months.
The Gothic franchise seems to be long dead now. What do you think? Is there a chance that the nameless hero, Diego, Gorn, Lester, Milten and others will ever meet again somewhere in the future?
I always hoped, that PB would at least do a remake for newer platforms, since they own the rights and it might be possible to finance it with such a well known brand. I really hope they will get around to that...
How does Ralf Marczinczik's life looks like ten years after Gothic 3? Are you still in the game industry?
Yes - but I also try to follow my own muse. I am doing concept design for bigger companies and a lot of illustration for game-covers and advertising agencies. With that money, I buy more of my own time and can do comics and books, which I was always hoping to do.
I know you are working on your graphic novel called WEISSE LÜGEN. Have you ever consider creating a graphic novel based on the Gothic universe? The short comics story created for Gothic 1 is still pretty awesome and more stories like that would be just fantastic!
Weisse Lügen was canceled two yeras ago. It was simply impossible to get the project financed. I am doing short stories now - and prep a new web-comic series at the moment.

To do Gothic as a gomic could be fun - but here in Germany, it's almost impossible to get the money to do that. You get enough to live on for two months - and then you still would have to find a way to survive for another four months to finish the comic...
Gothicz.net