1. Well, tell me how does your typical development day look like?
The typical development day at Trine starts at 9 am with all the employees signing in their attendance in the office using the web based internal project management system. Once they log-in , they can see the current day tasks and meetings scheduled to them. After that each developer begins to work on his tasks. At the end of the day there are daily team meetings with the Producer and the Team Leads who update the producer on the tasks accomplished and the associated risks. The employees leave at 8-9pm. The Producer and Associate Producers stay behind till 11 pm to synchronize the information with the Dreamcatcher and JoWooD Production team and thus the day ends.
2. I can't imagine a game development studio in India. Where exactly is it located and what about the technical accessories? Which are you using? How many members do you have?
We are located in Mumbai in the sub-urb area which is the house of many Movie studios due to the larger offices spaces available and the peace of mind. The beach is 15 minutes walk from the office. Trine uses one of the best hardware in the industry with all developer machines equipped with the latest Core-2 Quad processors with 9800GX2 graphic cards. Central disk storage space is available to the Developers which is 18TB in size. Trine has its own internal motion-capture studio which we use for all animation requirements. We currently over 214 developer employees. We are shortly opening up another office area in New Delhi  the capital of India.
3. Let's go to the addon. How would you describe the beginning of your work on Forsaken Gods? Was it difficult to get through the engine and such things inherited from Piranha Bytes?
It was very exciting starting the project. Gothic is a very rich universe which gave us much to work with. We spend a lot of time developing the backbone for the story, coordinating with Spellbound to ready things for the beginning of ArcaniA  A Gothic Tale. Getting through the Gnome engine had its perks, it was very tricky to get things moving within the engine. Working with the Editors were very troublesome, as it would take up to 10 minutes to load up on our machines. Random crashes would eat up more time as the program had to be loaded again. Toward the end everyone got the hang of it very well. 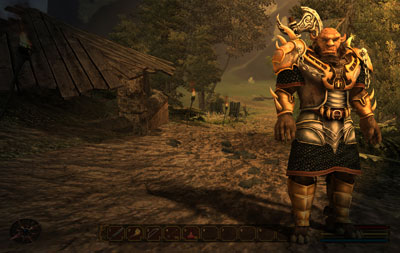 4. The most of add-ons brings a new territory and a world to explore, but G3-Forsaken Gods seems like a big monster patch... Were you limited by time, money or it was difficult considering the unfamiliar engine?
The Gothic 3 world was very large as it is, and with the story taking place in the same location, we were lucky enough to be able to use the same area. Though areas in the locations have gone through renovation and evolution, its mean to show people what is going on in Myrtana after the ending of Gothic 3. Having to pick up a unfamiliar Engine in such a short amount of time, it was too much of a risk to try expand the area. JoWooD gave us a very good budget to work on considering the dedication of the Gothic fan base. This is why you can see many improvements to the engine such as Graphics which gives the gamers a feel of playing a complete new Gothic game rather than the addon.
5. As we know, you cooperated with Spellbound on the story. How did they influence your game and who did write the main story line?
We had some set boundaries with creating the story for Gothic 3 Forsaken Gods. To keep the current ArcaniA  A Gothic Tale story intact there were a list of characters that we can, cannot kill, a list of events that must happen during the time span of Gothic 3 ending and the start of ArcaniA. But with these in mind, we created several story variations that we could of taken, and ended up cutting, picking, choosing the best parts from each version to combine into the series of events you see in the final game.
7. We will play two years after G3. What did our hero do in this time?
Gothic 3 Forsaken Gods branches off the ending where the hero leaves to the unknown lands with Xardas. The hero will be with Xardas the entire time, watching Myrtana after the war with the orcs.
8. How did you improve the combat system? Did you have any time to develop anything own at all?
The combat system has been modified quite a bit to give more depth compared to Gothic 3. Before enemies would just rush up to you and attack endlessly until you die. In Gothic 3 Forsaken Gods, enemies now have a stamina bar, and they will behave aggressively or defensively depending on their personality and how much stamina they have. Enemies watch their stamina closely now, and begin to fall back if they are running low on energy. Some cowardly enemies even run away if they know they are going to be defeated. The way damage is calculated in Gothic 3 Forsaken Gods has been improved as well. For example piecing moves do more damage with swords rather than axes. Players will now have to choose carefully on stats to improve, either it being strength, dexterity, or stamina.
9. The one of characteristic things of Gothic were dialogues - rough, hard and often sarcastic and funny. How did you work out this "Piranha Bytes" style?
Our designers and writers went through a tough time getting in the Gothic "character". Getting into character affected our personal lives, as people who knew us began to see the changes in our behavior. We were becoming more like Gothic characters, being rough, hard, sometimes dark even. Being able to add a little bit of sarcastic and funny dialogues were avoided to keep Gothic's serious atmosphere. Though as we enjoyed our work, and developing the characters with the story, we found it impossible not to add on some humor.

11. Were there any differences between developing Gothic and one of your previous games? Were there for example bigger pressure from the publisher?
The Gothic development time we would say was short. There is an enormous amount of content that we felt needed to be pushed in, but with the limitations of picking up PB's code and trying to push content from day 1, you can say that we were not able to fully portray what we originally intended. We had put a large development team of 45 developers on to the project. There was never much pressure from the Publisher as they wanted to give us our freedom and peace of time to deliver the best possible game, although the priority to release the game by November 21st was there.
12. What about bugs? What have you done to not to be Forsaken Gods a game full of bugs? Was it hard because of not-so-good Piranha Bytes' work on the main game as well?
Tackling all of the outstanding bugs is a major challenge, there are already so many bugs created from Gothic 3, that we felt we had all of those dumped on top of us, as well as bugs naturally created from development of the Add on. The scripting engine from PB creates a lot of bugs when it comes to developing content. As we became more comfortable with PB's work, we were able to avoid a lot of unnecessary problems. For Forsaken Gods we had sent the game into QA from First Playable milestone which ensured early reporting of bugs, we have tried to remove as many bugs possible and we will continue to work with the community in addressing issues after the game is released.
13. Are you satisfied with your job? Are there any things that you would do another way than before?
Yes and no, With the project being in such a short development time, having technical limitations such as time and codebase, we felt that we could do much more than what is currently presented in Gothic 3 Forsaken Gods. When working on huge projects such as this one, you always have way more ideas than you could possibly implement at the end of the day. We feel that the Gothic universe is very deep and we would love to be able to cram more content in the game.
14. What about the future? Was your work on the addon just one-time job or the co-operation with JoWooD will continue?
We have a long term relationship with JoWooD , we have previously developed The Guild 2 Venice for them. We are currently working on 3 more games with them based on the popular Jowood games and possible sequel versions of other games ;)
15. Thank you for the interview. Now, is there anything you would like to say to the fans?
I understand, many fans were upset initially with Gothic being developed in India despite being a German game. I would like to assure everybody that Trine is a very capabale studio with some of the most talented members in the world. We have developers working at our office from many countries such as USA, UK, Germany, Russia, Japan, France etc. along with the Indian developers. It is also the only company in India which makes games for Playstation 3 and XBOX360 .


And here is bonus material: Photos of one of Trine Games office.